Am a keen follower of Microsoft's SharePoint Blog and proud to provide this direct from the Microsoft Tech Community:

Building fast, fluid Microsoft 365 web applications is one of our core focus areas on the SharePoint engineering team. Over the course of this year, we’ve double-downed on performance – making our web apps load faster, delivering up to a 57% improvement in page interactivity, along with the ability to work with data offline. We’re pleased to announce we’ve reached general availability for Microsoft Lists customers. The focus of this article is to share how it all works and how we went about designing and developing it. 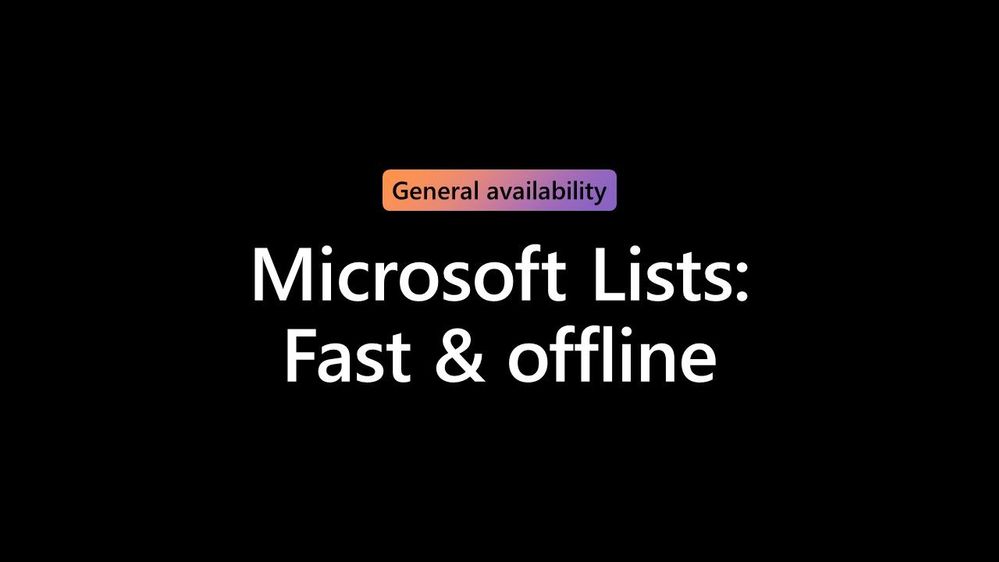 And we didn’t stop there. Our ambition is to deliver experiences that are consistently fast for every user on all kinds of networks and devices – even when there is no connection to the Internet. To help us accomplish this, we looked beyond the fundamentals to unlock new levels of web performance and enable new ways for our customers to experience Microsoft 365 web applications. We do this by blending Progressive Web Apps (PWAs) and expanding Project Nucleus.

The combination of Progressive Web Apps (PWAs) and the expansion of Project Nucleus enables faster Web applications – even when offline.

As part of our ongoing effort to improve performance and design new experiences, we began transforming our web applications into Progressive Web Apps (PWAs) starting with Microsoft Lists and OneDrive.

Install Microsoft Lists as a Progressive Web Apps (PWA) from your browser.

PWAs allow us to provide access to open web technologies for cross-platform interoperability. And in turn, you get an app-like experience customized for your devices. They are websites progressively enhanced to function like installed apps. PWAs allow us to combine the best of the web and native apps, like websites with app features: The ability to load offline, run within the local operating system, support push notifications and periodic background updates, access hardware features, and more.

When installed, PWAs are just like other apps on Windows. They can be added to the Start Menu, pinned to the Taskbar, work with files, run on user login, and more. 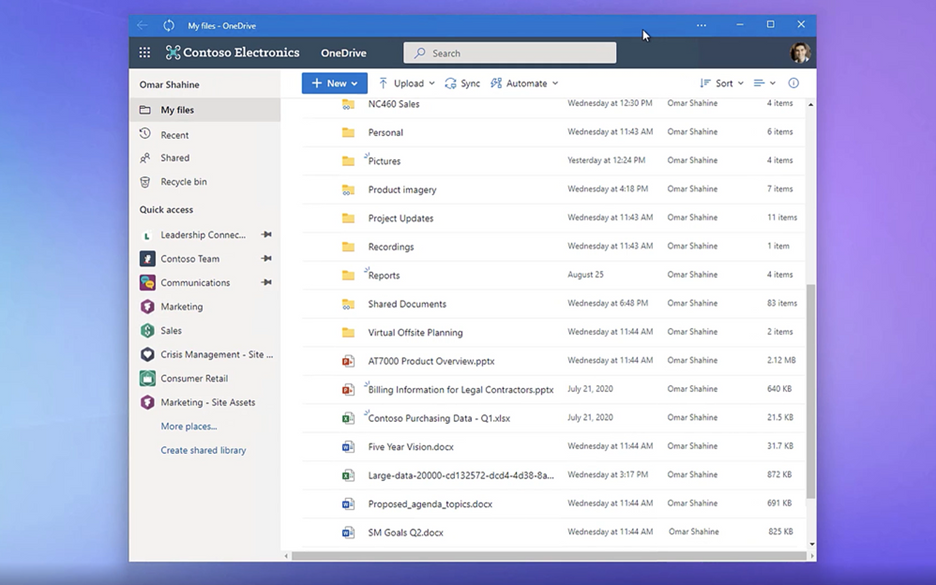 OneDrive as a PWA running on the Windows desktop.

To build web experiences that load and function offline – including support for editing – we had to look beyond PWAs. Enter Project Nucleus.

It all started as ‘Project Nucleus’

Project Nucleus was the codename behind our initiative of building a new client-side component to supercharge existing web apps, like Microsoft Lists, by providing a consistently fast and smooth experience on all kinds of devices and networks – again, even working when offline.

By leveraging local storage for fast data retrieval, it also enables our customers to seamlessly work with large and complex datasets made available through our web apps, like Lists with hundreds or thousands of rows. Operations on web app data, like sort and filter, are blazing fast because they occur on the local device. All offline changes synchronize back to the cloud once reconnected to the Internet.

Behind Project Nucleus is Microsoft.SharePoint.exe, a new component delivered alongside OneDrive sync – leveraging the existing OneDrive install and update mechanism. Once installed, it links with the web app by making a smart cache of web app data on the local device. It then acts as a local web server by pulling and pushing data to and from that local cache, instead of the web app always retrieving it from the cloud. This enables offline editing; changes to content occur within the local cache first and then get pushed to the cloud once connection is restored. The result helps save on network bandwidth and eliminate bottlenecks, too. 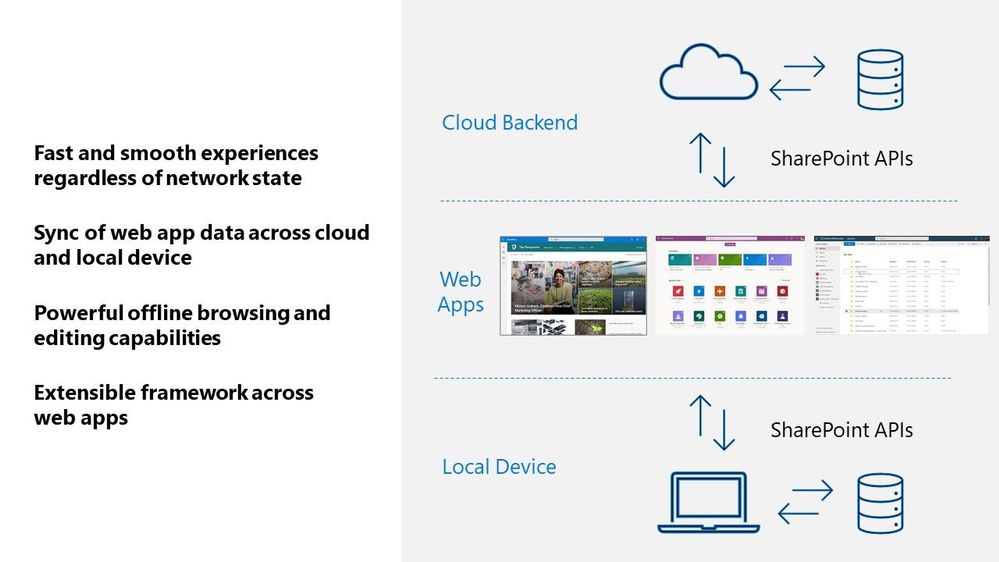 A visual diagram showing how web apps interact across your local Windows device and cloud services in Microsoft 365.

Microsoft Lists is our first web application that leverages these new capabilities. First, it means you can load the Lists app to view and edit list data whether your online or offline. Second, loading and interacting with lists gets supercharged in all modalities. Finally, views inside synced lists never get throttled – regardless of the number of items in the view or whether those columns are indexed. 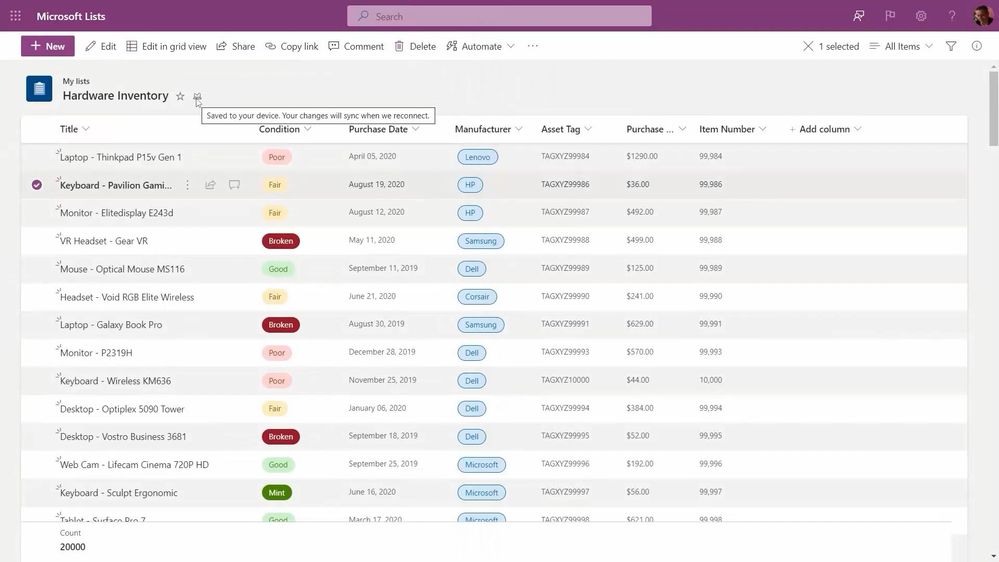 New Lists indicators show when your items are being save to your device (offline; as shown above), when the list is synchronizing, and when all is up to date (synced).

In short, your lists are always on, lightning fast, and less impacted by service-imposed limitations. This is where we start, and we plan to bring these benefits to other web apps over time. Stay tuned – online or offline – for future updates in this space.

Learn more about Progressive Web Apps, including ‘how to’ information for end users. Review all Microsoft Lists new from Microsoft Ignite – including the general availability announcement for Microsoft Lists: Fast and offline [Roadmap ID: 68809]. We have a new end-user ‘how to’ edit lists offline. And admins can review policies to control Lists sync settings.

Take a peek at the technology in action from the related Microsoft Ignite session, “What’s new with Microsoft Lists” (published on November 2nd, 2021 – jump to 13:30 to see the “Fast and offline access to list data” segment):


Thanks for your time to learn more, Andrey Esipov – Principal program manager, Microsoft

The above is kindly provided by the Microsoft Tech Community!

← Prev: Submit your OneDrive and SharePoint ideas to the Microsoft Feedback portal Mine your business – try Process and Task mining → 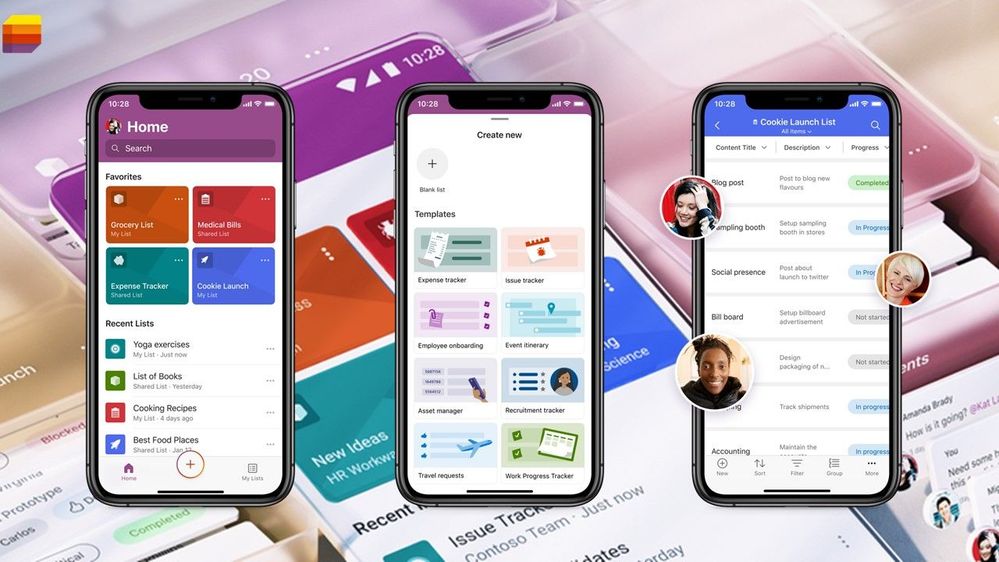 Across the globe we see the celebration of wonderful cultural moments. In living up to our mission statement –...