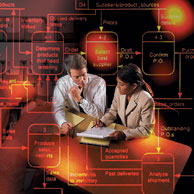 Been asked a lot for a Project Planning Template in Microsoft Project format (versions below) showing the flow of a SharePoint 2010 / 2013 / 2016 implementation, so I’ve crafted a format you can use. I’ve purposely made it generic, so you can modify and detail the relevant tasks associated with your implementation of SharePoint and its version.

Note – this template bears no direct relationship to any implementations I have managed, neither do the people assigned directly match and I would strongly suggest that you review the plan with the client to ensure their requirements are encapsulated.